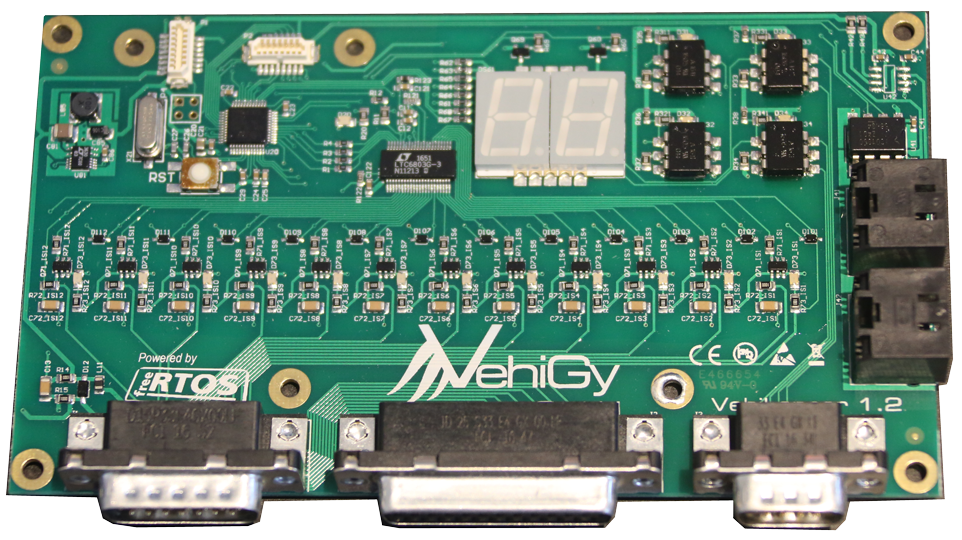 The RiseonBMS is a battery monitoring module which can supervise up to 12 cells. All currently available cell chemistries with nominal voltage range of 1.0 to 4.5V are supported. Individual cell voltages can be measured between -0.3 to 5V. The module primarily monitors each cell in a battery stack and can dissipate energy of an over-charged cell if necessary. Balancer currents of up to 5A are possible. The current is configured by choosing the resistance of the external power resistor. The threshold voltage when the balancing process shall be activated as well as its hysteresis are freely configurable.

Four galvanically isolated switches (Solid State Relay) are at the end-user's free disposal. Various criteria can be defined individually to open or close the loop - for instance an over or under voltage of one individual cell. Each switch may be discrete with programmable hysteresis, or of pulse width modulation (PWM) with programmable ramps. PWM signals can directly be used with certain chargers to control the current during the end-of-charge phase. If necessary an external low-pass filter may be used to generate a pure analogue voltage. Each switch may commute a maximal load of 60V / 2.5A.

Each RiseonBMS is equipped with an isolated CAN bus. It allows cascading of up to 16 modules per system, which is 192 cells in total. The CAN bus is also used to extend the system with other components by Riseon Power Technologies AG such as diagnostics tools allowing the comfortable configuration of each individual module in the system. Other products can integrate directly into electric vehicles and serve as a battery status display. Riseon Power Technologies AG is currently developing more extensive energy monitoring systems which will seamlessly integrate on the CAN bus.

This use case is assumed to power a small electric vehicle with a nominal voltage of about 80V. To monitor 24 cells of type LiFePO4 with a nominal voltage of about 3.3V each, two RiseonBMS are used. Each is connected to 12 cells and 12 power resistors of 2Ω, 15W each. The two modules are inter-connected by means of the CAN bus. In this configuration the CAN bus needs to be powered by an extra module also provided by Riseon Power Technologies AG for several standard input voltage ranges. In compliance with CAN specifications the bus is terminated on each end with a removable terminator plug.

To configure the system, one of the terminator plugs is removed and one of the diagnostic tools is plugged in instead. The just removed terminator is fitted to the second port of the diagnostics tool, this not only prevents loss of the plug, but again properly terminates the CAN bus. Both RiseonBMS can now be configured according to the requirements.

Normally one of the Solid State Relays is used to control the charging current as soon as one of the cells reaches the balancing threshold. The end-of-charge current must be set so that it is slightly below the effective balancing current through the power resistor. A second Solid State Relay is used to reduce the vehicle's motor power output if a cell drops below a lower voltage threshold. This will warn the driver of a potential problem by making the vehicle behave more sluggish. A lower power output also means lower battery current, which will protect the discharged cell from taking damage. In this application, using LiFePO4 cells, the balance ON threshold is set to 3.65V and the OFF threshold to 3.60V. The charger current is reduced to about 1.7A once a cell reaches 3.65V. The low-voltage protection is actually a PWM ramp starting at 2.8V and ending at 2.2V at which point the vehicle will come to a complete stop.

The here mentioned example focuses entirely on protecting the battery and may show some shortcomings in practical applications. You may wish to consult a Riseon Power Technologies AG representative for more advanced configurations.